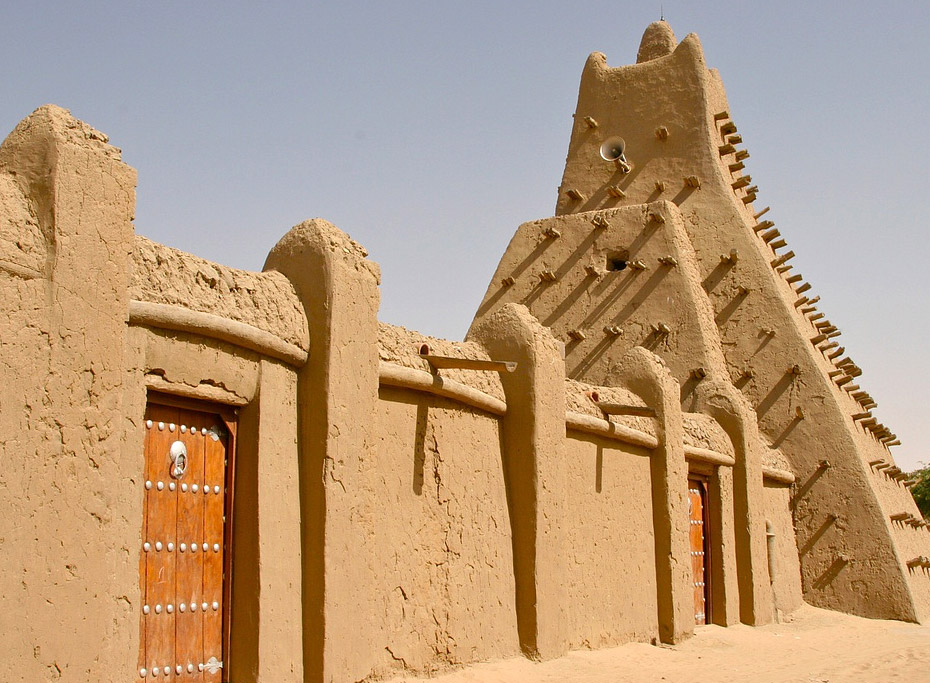 The mud architecture of Mali has, by centuries outlived the Mali Empire.

Between c. 1230 and 1670, the Mali Empire, also known as Manden Kurafaba, was the largest, wealthiest and most powerful in the history of Western Africa. It extended from today’s Mali, covered Mauritania, Senegal, Burkina Faso and crossed Niger to reach the Sahara. Perhaps the most familiar name that comes to mind is Mansa Musa, ruler of the empire from the 1600’s who spent so much gold that he caused a 10 year gold inflation on his way to Mecca.

Speaking of gold, today, Mali is considered one of Africa’s largest gold producers, yet, more than half the population remains below the poverty line. The people of Mali may have lost their wealth but, the culture remains untouched while old traditions thrive.

All this sparked my curiosity and here I am, ready to explore Mali’s holistic mud architecture and culture with you. Why has it remained unchanged through the centuries and is it possible the world might start looking to West Africa for sustainable housing alternatives? 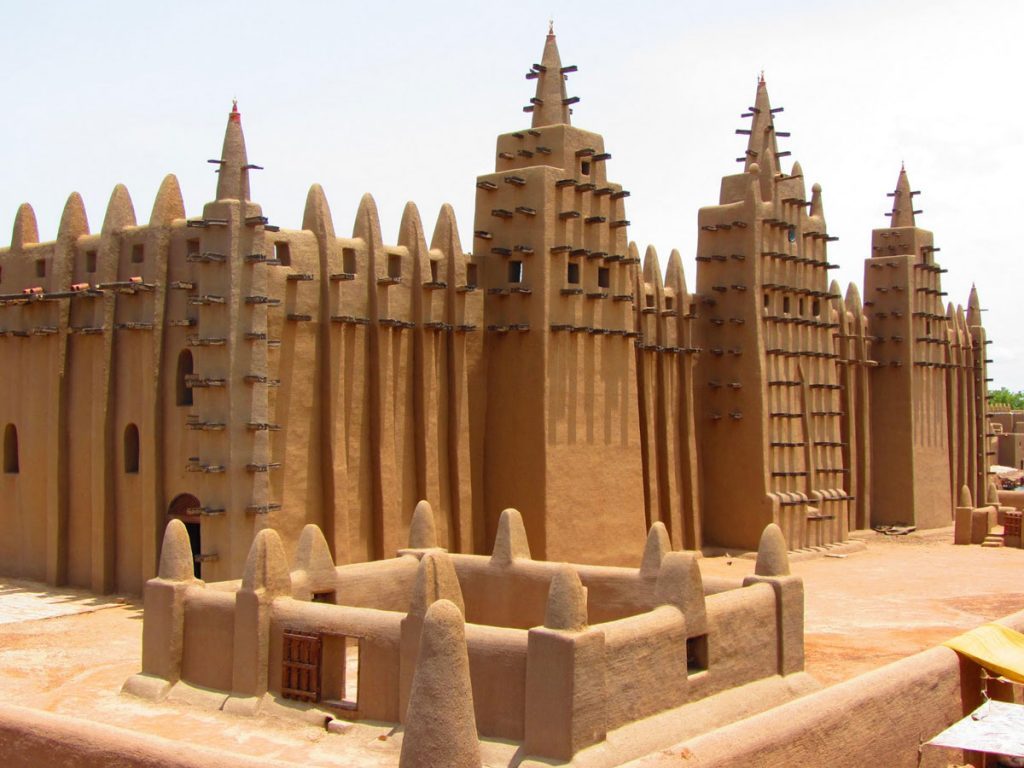 Built in 1907, the Great Mosque of Djenne is considered one of the greatest achievements of the Sudano-Sahelian architectural style. The building is made from mud and repaired every May during the Festival of Plastering.

The wooden beams not only add a uniqueness to the building, they also serve as steps the men use to go up and down the building during repair. 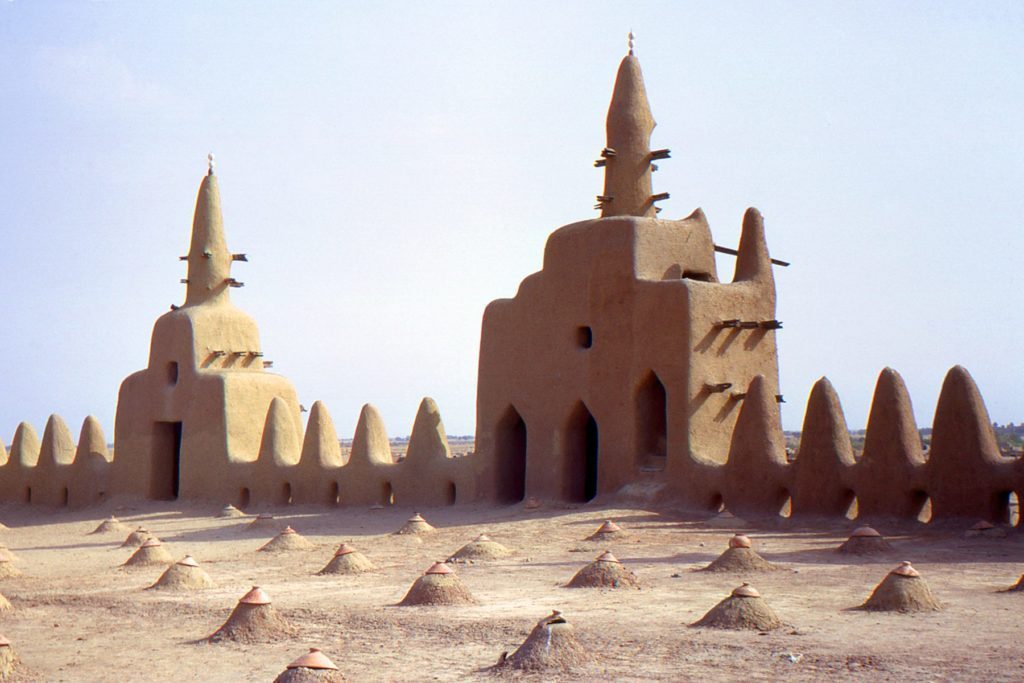 The terracotta covers the vents on the roof of the mosque to provide proper air ventilation.

The story of Djenne is one told through its architecture – majestic mud-brick structures that seem to perfectly emerge from the dessert sands. Once a trading hub and a center for Islamic scholarship, Djenne is now, since 1988 a UNESCO Heritage site. Over 200 earthen houses in this city date back several centuries with the masons (inheritors of the craft tradition) very much at the heart of the continuation and incorporation of these 14th century old techniques.  The masons hold generational spiritual secrets and for this, nothing on the land cannot built without their consent.

“It was our people, the Boso, who founded Djenné. Nothing can be done to the town without the masons’ involvement. Everything we do is linked to our tradition. Djenné is my school.” 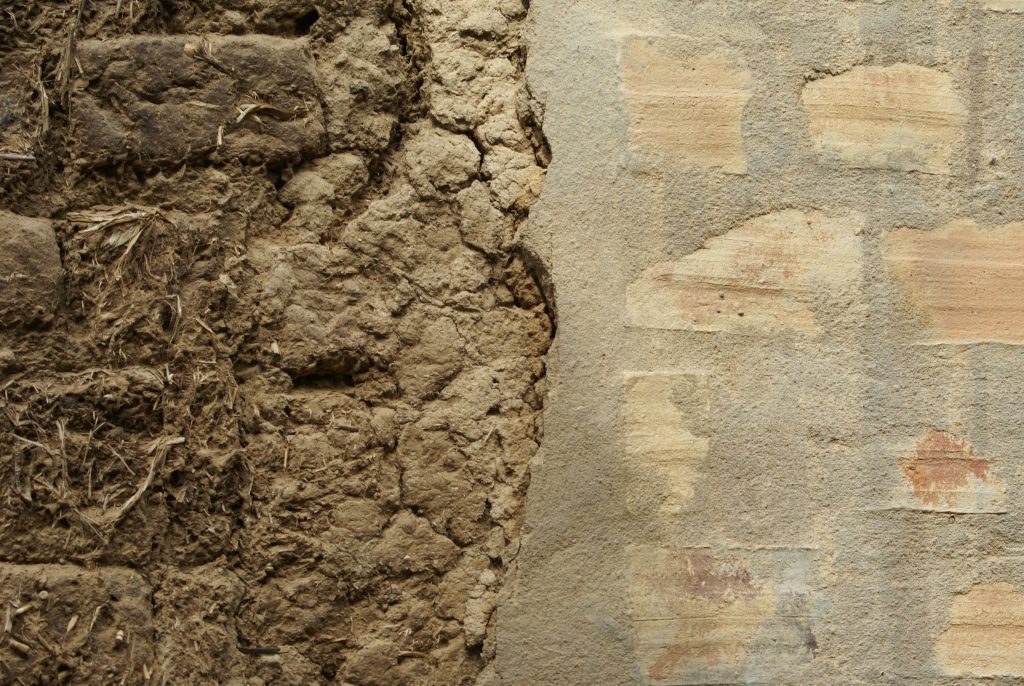 The people of Djenne have long resisted paved roads and electricity. Only a few cars which belong to non-governmental organisations are seen through this pre-historic town. If you are wondering how a mosque built entirely from mud can survive this long, you will be pleased to know that every May, the town comes together during the festival of plastering (La fete de crepissage). The men bring in the mud, while the women come with buckets of water. Older women prepare food, and the sounds of the drums echo over the men’s plastering labor. 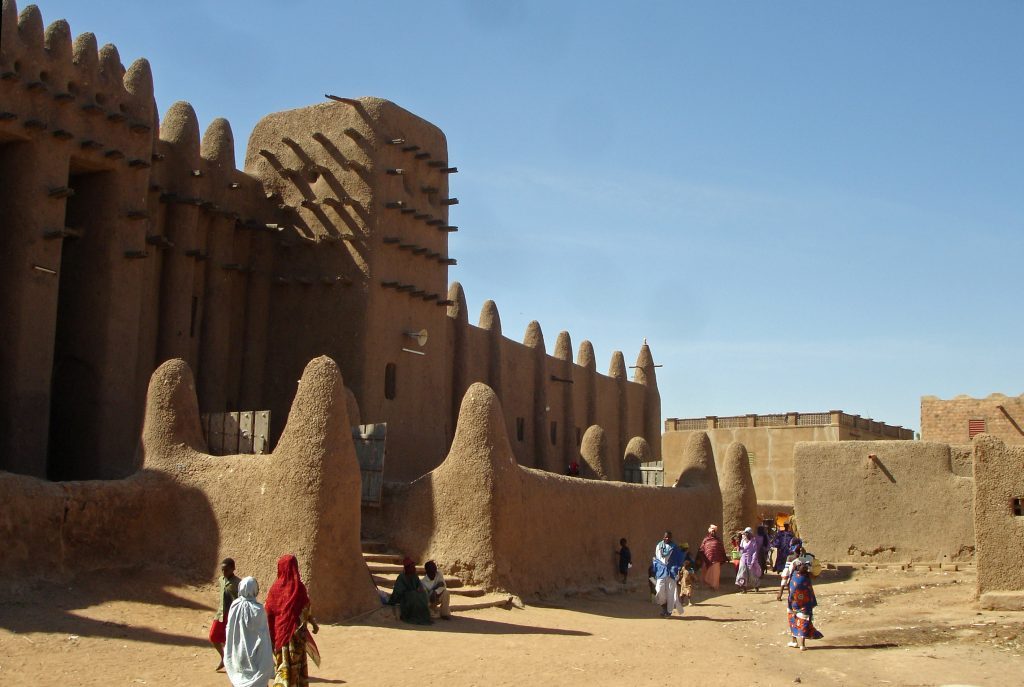 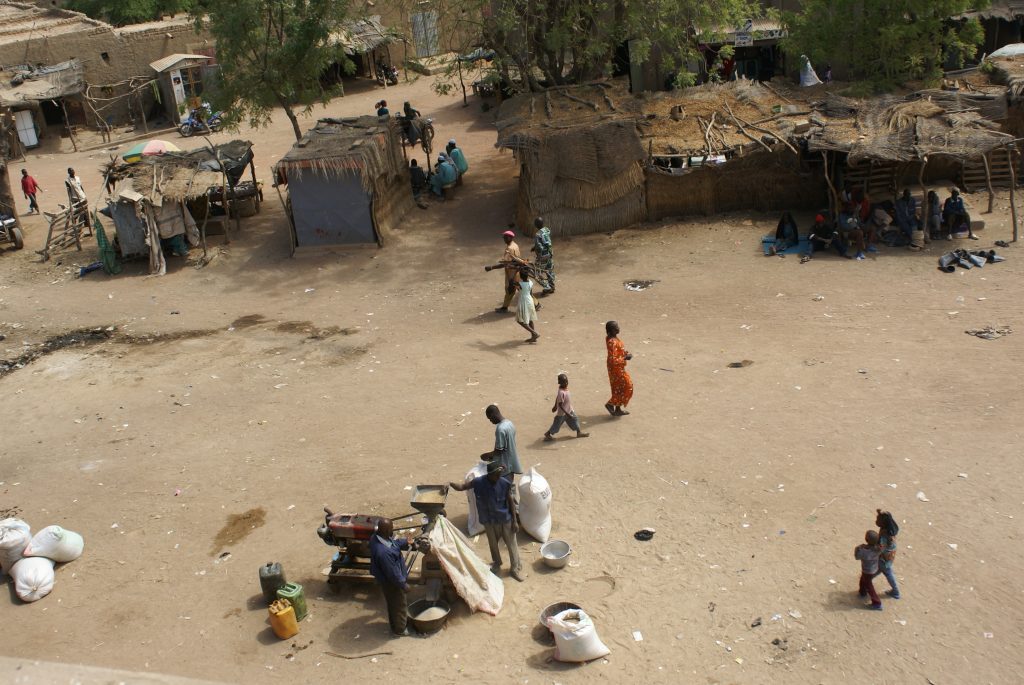 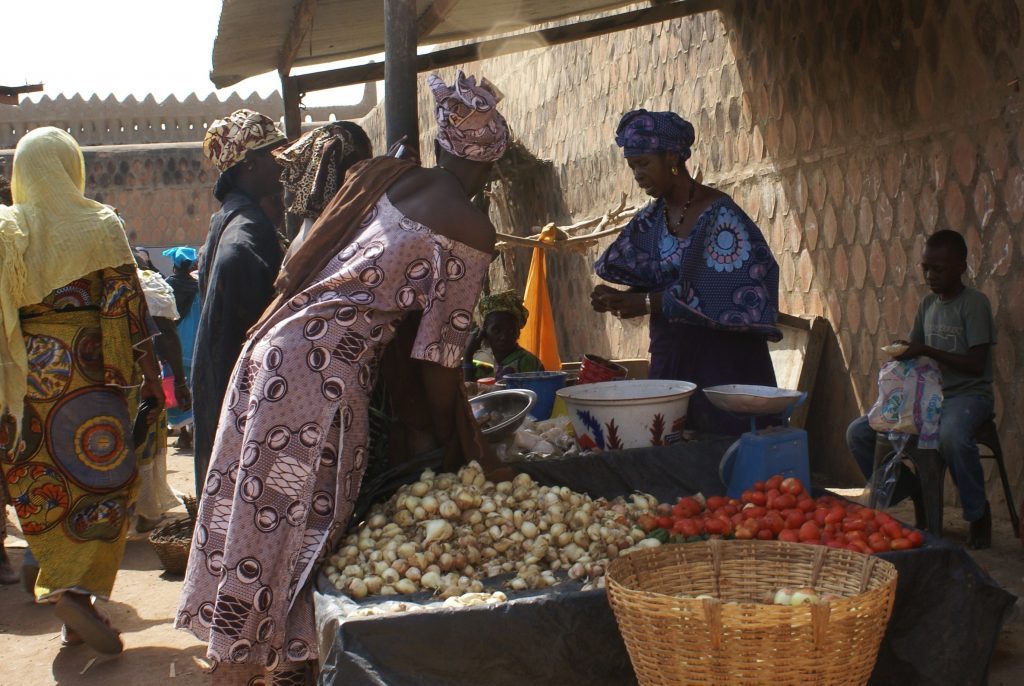 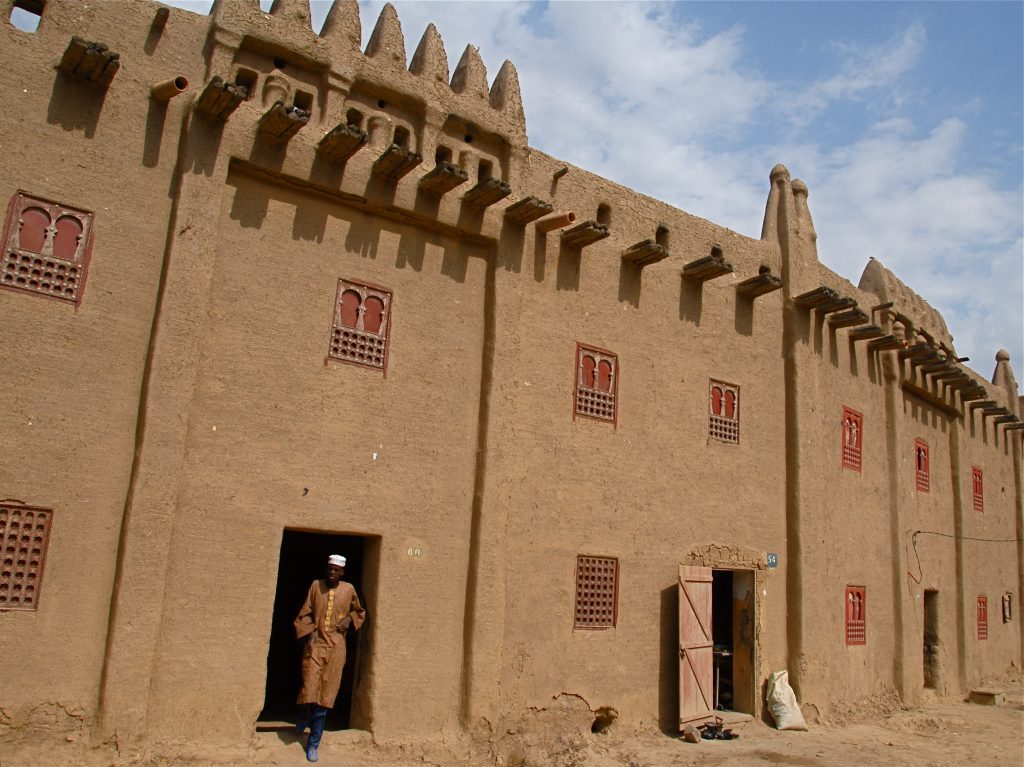 The mystical Dogon people of Mali

Since I introduced the topic as the “holistic architecture of Mali,” it is only right that we now head on to central Mali.

In the Mopti region, there lies no more than half a million of the remaining Dogon people. Theirs is a story of strive and their place of dwelling is also a perfect representation of a fight to defend their spirituality.

Dogon architecture, nestled in the safety of Bandiagara Escarpment, was home to those who resisted the forceful Islam conversion in the 1400’s. 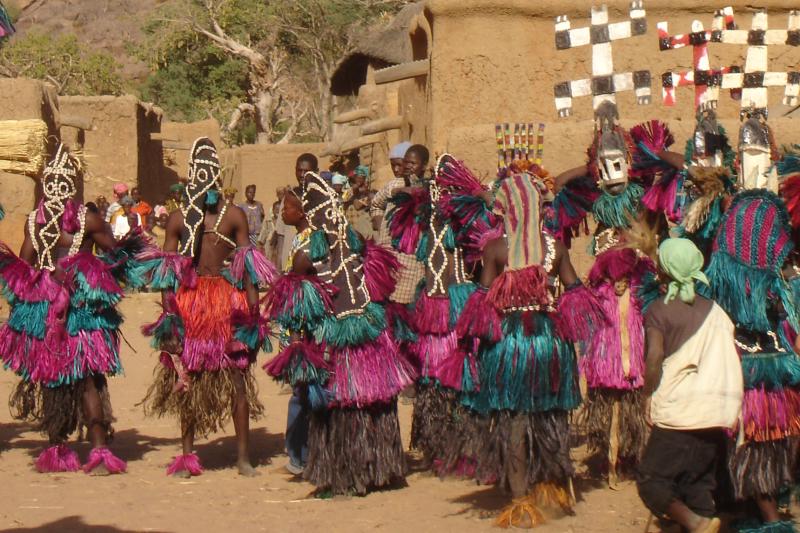 Dogon ritual. The religious beliefs of the Dogon are enormously complex and knowledge of them varies greatly within Dogon society. Dogon religion is defined primarily through the worship of the ancestors and the spirits whom they encountered as they slowly migrated from their obscure ancestral homelands to the Bandiagara cliffs

Dogon architecture: the houses on the cliffs and beyond

Ironically, the intimidating sandstone cliffs and plateaus settlements were often invaded, with the men murdered and the women and children whisked away to a new life of slavery.

It would take hundreds of years for the Dogon people to come down from the hills, but with time and a lot more stability in Mali, the Dogon settlements expanded. 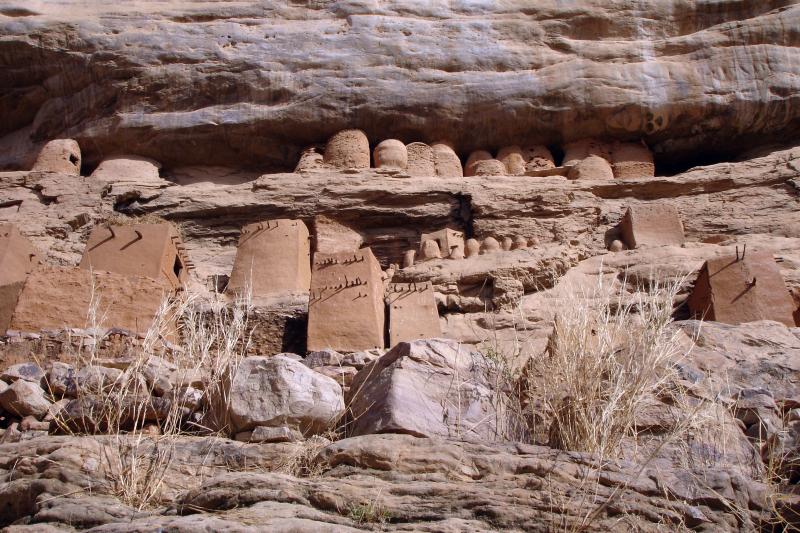 The cliffs are lined with vertical faces of earthen houses that seem impenetrable. Over the years, the Dogon people developed stamina as well as techniques to effectively and efficiently maneuver through their home. A skill that would take a stranger years to perfect. 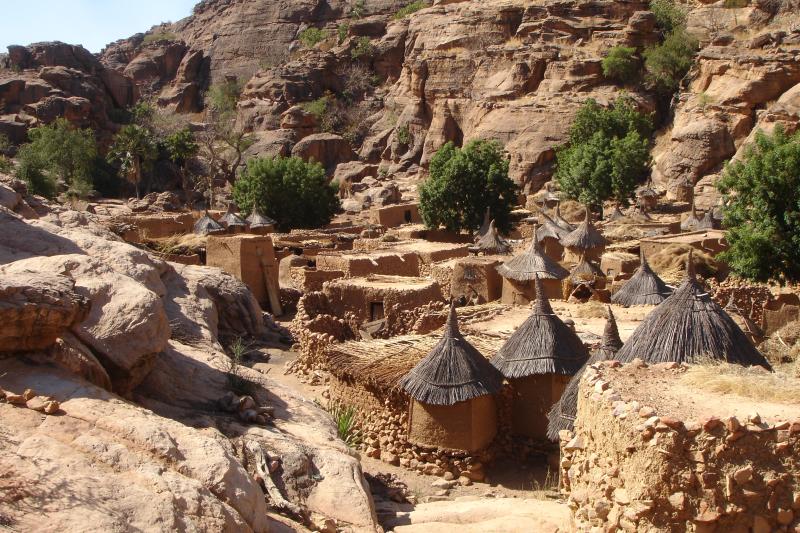 A typical Dogon village is dotted with granaries made from mud, a sophisticated invention that to this day is still in full use. The more granaries with pointer ‘hats’, the wealthier the homestead is considered to to be. 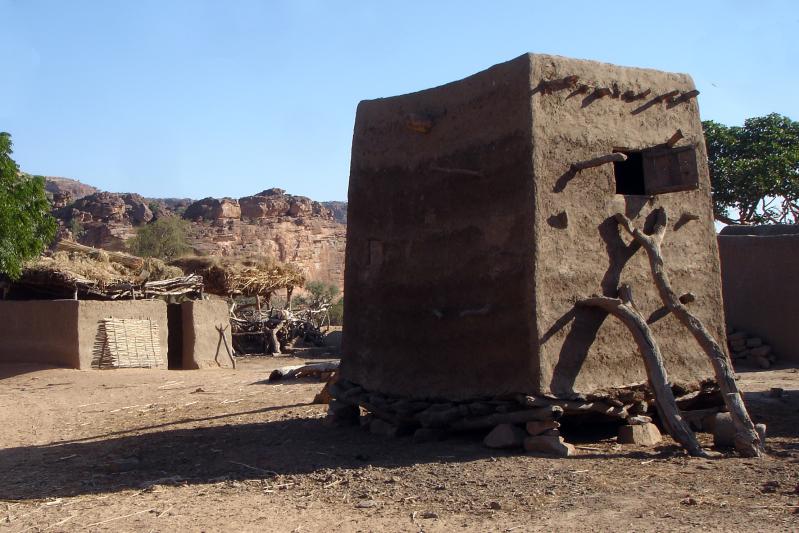 ‘Female’ granary
The Dogon females are usually independent, a granary like the one above, usually holds a females belongings, separate from her husband’s. 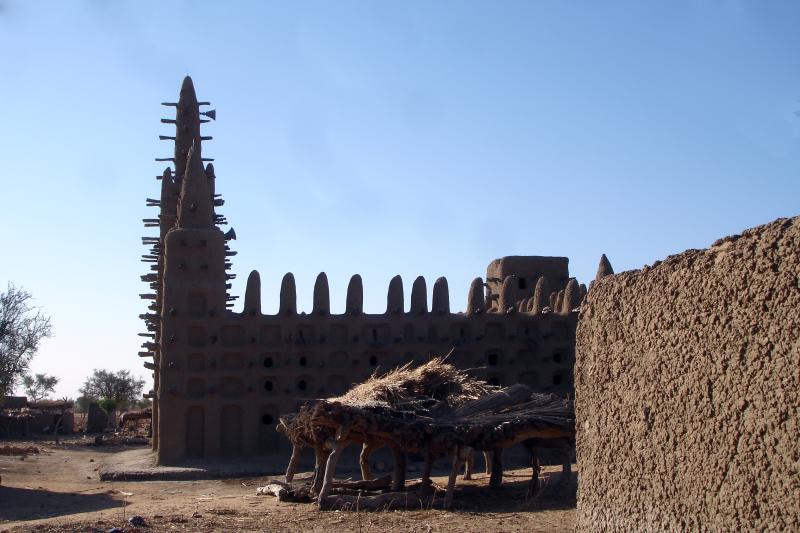 A mosque in the Dogon region.

Should we look to Mali's time honed architecture for sustainable alternatives?

While the elders worry that ancient traditions are beginning to fade, there is now a stronger need for the essential. Not only does Mali mud architecture hold much history, it also symbolizes vitality and the natural wealth mother nature so freely provides.

The houses of Mali are a connection back to our roots, an alternative to the high cost and consumption modern housing.

Do you think the Mali way of building is a sustainable modern housing alternative?

Images: A broad spectrum of archives.

Begin typing your search term above and press enter to search. Press ESC to cancel.

This website uses cookies to improve your experience while you navigate through the website. Out of these, the cookies that are categorized as necessary are stored on your browser as they are essential for the working of basic functionalities of the website. We also use third-party cookies that help us analyze and understand how you use this website. These cookies will be stored in your browser only with your consent. You also have the option to opt-out of these cookies. But opting out of some of these cookies may affect your browsing experience.
Necessary Always Enabled
Necessary cookies are absolutely essential for the website to function properly. This category only includes cookies that ensures basic functionalities and security features of the website. These cookies do not store any personal information.
Non-necessary
Any cookies that may not be particularly necessary for the website to function and is used specifically to collect user personal data via analytics, ads, other embedded contents are termed as non-necessary cookies. It is mandatory to procure user consent prior to running these cookies on your website.
SAVE & ACCEPT